This is another of our user friendly easy to follow guides. This time we cover how to backup an Android phone or device – quickly and easily. You don’t need to read about twenty different backup methods just one that works!

In the past, when technology had not reached the point where it is today, backing up your Android device was a task that would be painstaking and something you would come to dread. It could take hours upon hours of waiting for things to download, including third-party software that was once required to download a backup.

However, nowadays backing up your Android phone is a task that is incredibly easy. 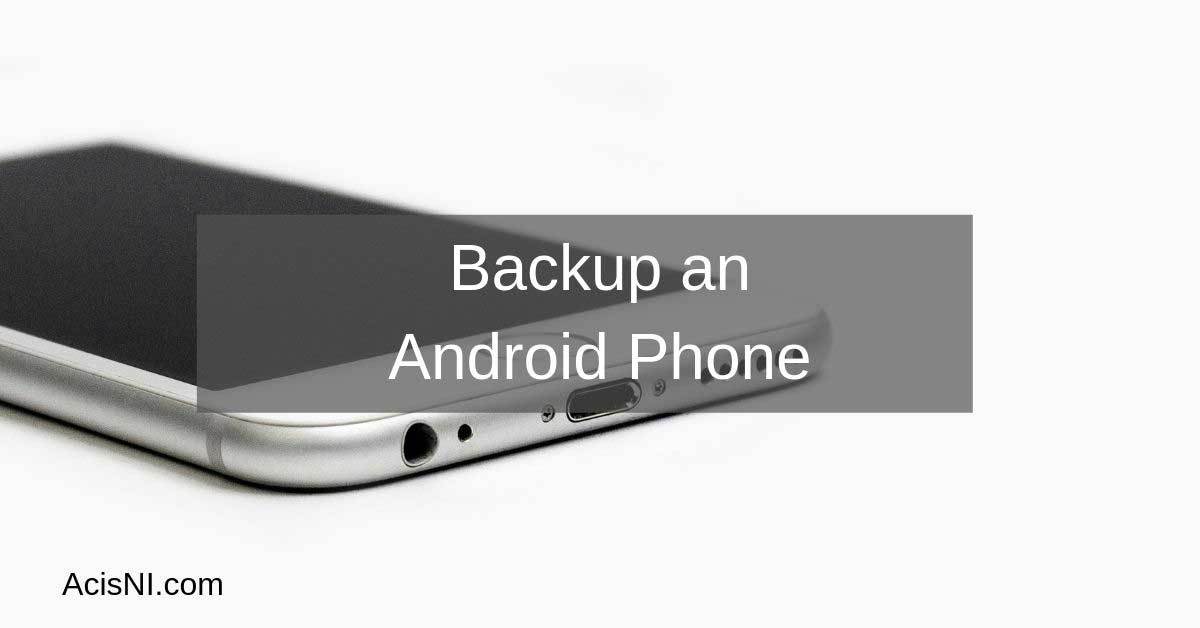 This is part of a series of security related articles aimed at finding out if your Android phone has been hacked then how to detect spy software on your phone – and then how to get rid of phone spy apps. To help with the process I also have guides on how to factory reset an Android device. Have a good look around – you should find everything you need!

When you are planning to backup your phone, there are a few things that you will want to pay attention to. Because phones have become one of the cruxes of daily life, it is more important than ever before to make sure that you have backed up all the information and settings that you need to have.

From contact information to app configurations, making sure that your phone is properly backed up will ensure that you will be able to access this crucial data, should you ever need to restore your phone from that backup.

Backing up the General Settings

Before you can begin learning how to backup your Android phone, you will first need to understand a little bit more about how the general settings and preferences will influence how the backup process works. Usually, general preferences and settings will influence aspects such as which WiFi networks you connect to, time and date settings, and how things are displayed on your phone.

These, as you might be able to imagine, are very important settings for any phone to keep, meaning that you will want to make sure that these settings are being backed up properly.

To check this, you will first need to go into the system settings on your phone. Once you are there, you will want to look for the section labeled “Backup & Reset,” or a section with a similar title. After you have selected that option, there should be a few things that you can toggle underneath an option labeled “Back up to Google Drive” or a similar name.

Underneath that should be an option to make sure that your general settings and preferences are included in the information that is in the backup. In this same area of settings, there will also be a section labeled “Device Settings,” where you will be able to check when everything was backed up.

Sometimes, depending on your Android device, you might have to go down the route of System, then Backup, then you will find yourself with the same list of options.

By knowing how to properly backup the general settings and preferences of your Android phone, you can rest assured knowing that the next time you have to restore a device from backup, you won’t have to spend hours re-configuring all the settings that you spent so long getting to where you wanted them.

Next, you will want to look at knowing how to backup apps and app data so that the next time you restore from a backup, you will have all the apps you need without having to download and configure them all.

Backing up Apps and App Data

The next thing that you will want to pay attention to when you are planning to backup your Android phone are your apps. The apps on your phone are arguably some of the most important aspects, making it all the more important for you to make sure that you are keeping your apps backed up properly.

Thankfully, the apps on your Android device will always be synced to Google’s servers, which will make it significantly easier for you to pick and choose the apps that you want to keep on your backup list.

If you are running a device that has 2015s Android 6.0 Marshmallow release, or something more recent, then there is an expanded backup system for you to further customize which apps you want to include in your backup. In fact, you can even backup things such as sign-in preferences and small details such as this.

Of course, as long as the developer of the app has properly integrated everything, you won’t have to worry about a single thing when you begin picking which apps to backup.

You will want to go back into the same “Backup” section of the system settings on your phone. After this, you will want to go to the “App Data” line, where you can choose exactly which apps you want to have backed up to your device.

Many phones will also inform you when each app was last backed up as well, which will be important information to note. Once you have done this, you will want to move onto backing up miscellaneous areas of your phone.

Backing up the Miscellaneous Areas

Under the miscellaneous areas of your phone, you will be backing up files, messages, calendars, contacts, emails, photos, and music. Some of these will be found in the same area, whereas others will be elsewhere in the settings.

Generally, calendars, contacts, and emails will all be in the same general area of your phone’s backup settings. Music and photos will also be in the same areas as well. Files and messages are usually in separate areas, but they will be easy enough to backup that you won’t have to worry about it.

Backing up Contacts, Calendars and Emails

When you are backing up contacts, calendars, and emails, you won’t have to do much. This is because this area of your data is usually cloud based or cloud connected. It won’t be so much backing up the data of emails and calendars, as you can simply open up the same data on the same account, but on a different device.

Backing up Messages and Files

For messaging, you will generally want to rely on a messaging app. Google’s built-in Android Messages app will usually get the job done (or at least, 25MB of the job), but there are some third-party apps that will take care of all the messages and message data.

For files, the best thing that you can do is upload them onto another storage service. This could be Google Drive, or another service such as OneDrive or Dropbox.

Similar to messaging, there is no specific area where you can make sure that files are being backed up, which means that you will have to actively upload the files you want to keep elsewhere.

Did you realize that some spy apps can be used to retrieve deleted texts from an Android – I have an article covering this, check it out!

Backing up Photos and Music

Photos and music are also easy to backup as well. Of course, using Google’s own Google Photos app is going to be one of the easiest ways to get the job done for your photos, as this app automatically syncs your photo data to every and any other device that you can access Google Photos on. Likewise, Google Play Music can let you upload your own songs, up to 50,000 of them, for you to play on any other Android device.

While there are some rumors that this app might eventually merge with the more recent YouTube Music, Google promises that this won’t happen until the same storage capacity is available. If you rely on a streaming app, then all you will have to do is make sure that app is backed up and you will be completely prepared next time you plan to restore your Android phone from backup.

For Apple users I also have detailed guides:

How to Back Up an iPhone

How to Restore an iPhone From a Backup

How to Factory Reset an iPhone

Backing up and restoring has become so much easier in recent years – now you have no excuses!